Apprentice of the Year – Stage 2 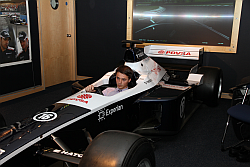 Our apprentice Josh Lawson is taking part in the Excellence Apprentice of the Year Awards as part of the Jaguar Land Rover Apprenticeship Programme.

Josh has successfully passed assessment Stage 1 and has been invited to the next stage of the competition, where he is to attend a skills day at the Academy on Wednesday the 12th June 2013 to compete against the other high achievers taking part in this award process.

We are so proud of Josh, he scored so highly in the first stage that he has been invited to attend the Apprentice Awards which is held at Williams F1 on Friday 6th September where the winner of the competition will be announced.